Four days of intensive work this week have seen most of the outstanding paintwork items dealt with.  The "Queen Anne" advertising vinyls will hopefully be applied by an expert in a week or so.

This is the colour for the buffer discs, draw hooks, wheel rims, cab edging, cab interior and lining out.  These items (except for the lining) had up to now been painted in a cream undercoat.

Note that the windows are now fitted as are the curtains.

The lining on Queen Anne is quite complicated and is over 36 metres long in total.  It consists of lines 9mm wide in Sand Yellow.  The original was probably painted by (a very skilled) hand but it was decided to use masking tape this time.  For the straight lines (ie. most of it) 3M Fine Line Striping Tape 06314 was used.  This is 1" wide with 8 x 1/16" strips down the middle that can be peeled out after the tape is in place.  For the curved lines two strips of flexible 3M 471 masking tape were used with the gap between set by eye.

The original Autocad drawings for the cab platework were modified to include the lining.  The actual size and placement was determined by examining many photographs of Queen Anne in the original livery.  Guidelines were then added to the drawing 12mm outside of the centre of the lines, which is approximately half the width of the striping tape, so laying the edge of the tape against these lines would put the painted lines in the right place.

The guidelines were drawn on the cab using a black Chalk Marker (this is supposed to rub off with water, but requires a bit of scrubbing).  The striping tape was then carefully applied inside the guidelines :-

The gap between the strips of masking tape was rubbed down with a thin strip of emery paper to remove the gloss and provide a key for the Sand Yellow paint.  The paint was then applied using a small brush and left to dry overnight.  The following day, once the paint was fully hardened the tape was carefully removed to reveal the finished lining.  The 3M tapes work very well and are easy to peel with no seepage under the tape.

As stated earlier, the "Queen Anne" vinyls are due to be applied soon and the loco will again look as it did when it arrived from Longmorn Distillery in 1980.

Another reminder that Queen Anne will be in action giving brake van rides at the Strathspey Railway Diesel Gala on the 18th, 19th and 20th of March 2022.  She will be top-and-tailed with the ex BSW Sawmill Fort William Thomas Hill Vanguard.  Both locos are 4-wheel chain-driven diesel shunters.  We hope to see you there.

If you upload any videos featuring Queen Anne at the Gala to YouTube, there is now a new page on this blog "Queen Anne Videos" to provide links to appropriate content.  A search of YouTube will be made periodically and links to new videos added.  To make sure your video is found, please add tags "queen anne", "ruston" and "shunter" to make it easier to find.

Posted by Restoration Man at 18:57 No comments:

The self-adhesive vinyls have arrived.  The artwork had been prepared some time ago using desktop publishing software and are an accurate representation based on measurements of the old panels and some trickery to create a "Queen Anne" font very similar to the original.  The quality of the printing is very good.  The artwork has been printed on standard 40" x 60" and 700 x 1000 mm sheets with a brown border that will be trimmed prior to fitting.

Two of the vinyls were taped in position on the cab sides to gain an overall impression :-

The same brown colour (NCS S 7020-Y30R) was specified for the paint and printing, but inevitably different processes produce different colours.  The excess darker brown on the vinyls will in any case be trimmed off before fitting.

The vinyls will be applied once the lining has been painted.

The curtains have been made and are ready to fit, which will be done after the final coats of paint have been applied inside the cab.  Oilcloth was tried initially, but proved unsuitable so waterproof vinyl cloth was tried and works very well.

The fabric was cut slightly oversize based on initial measurements and a wide hem was stitched on the top edge.  It was determined that 10 eyelets per curtain were required and these were riveted to the hem using a tool specially bought for the job.  The eyelets are marine grade solid brass (not the cheaper brass plated ones) with a 1/2" hole.

The curtains were threaded onto the curtain rods using the best of the original copper curtain rings and some new ones.  In a previous post it was explained that the old rings had been used in the whisky still in a device to prevent frothing.  The curtains were then trial fitted to obtain the correct width and drop :- 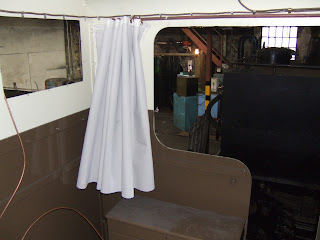 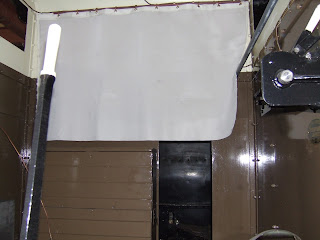 The curtains were then taken away, trimmed to size and a 1/2" hem stitched on the other three sides at the curtain workshop :-

There is no fuel gauge on Queen Anne, so a dipstick was made from a piece of oak.  The level markings were calculated based on original Ruston drawings of the fuel tank that are archived on the Lincs To The Past website.  Artwork was produced using Autocad and the markings burnt on using the Laser Engraver at Kingussie High School.

While re-routing the fuel pipe from the tank to accommodate the Chain Oiler, it was noticed that fuel was not flowing freely from the tap under the tank.  This was because the tap had become blocked with rust flakes.  Fuel taps for motorbikes etc. often have a tubular gauze filter that pokes up into the tank, so it was decided to obtain one of these and fit under the tank.  This should ensure a free flow of diesel in future.

The installation of the chain oiler is nearly complete, and will feature in a future blog post.

It is hoped that Queen Anne can be moved into the Carriage Restoration Shed for the week beginning Monday 21st February so that painting can be completed.  The upper inside of the cab needs finishing and the lining and other details need to be applied.  Hopefully the vinyls can be applied shortly afterwards (ideally by someone who has done it before).
The Strathspey Railway is holding a Diesel Gala on the 18th, 19th & 20th March 2022.  Queen Anne will be appearing and we hope to have everything finished by then.
Posted by Restoration Man at 20:32 No comments: