If you look at the black-and-white photograph at the top of the blog, you may be able to make out a small sign fixed to the lower bodywork of the locomotive.  After purchasing a full-resolution copy of the photograph and blowing it up, it can be seen to be an owner's plate.
It reads "Ms. Longmorn Glenlivet Distillers Ltd." - the "Ms." stands for Messers.  The plate is long gone, but by measuring the distance between the empty bolt holes on the locomotive (15 inches apart) it is possible to work out the size of the lettering etc.  A desktop publishing program (Scribus - it is free open-source software) was used to produce artwork to match the original :-
Kingussie High School has been very generous in allowing us to use some of the equipment in the Technology Department, namely the CNC router and the casting furnace.  The artwork was used to produce a pattern in MDF using the CNC router.
The pattern is placed in a wooden frame known as a flask, and oil-based moulding sand compacted firmly around it.  The easiest and quickest way to cast something like this is to use an open mould, and simply pour molten metal (Aluminium in this case) into the flask after removing the pattern.  However, the quality of the resulting castings was not very good.
The metal has not flown fully into the lettering, and shows a meniscus instead of sharp edges.  The reason for this is that there is not enough pressure to force the molten metal in - the pressure is only about 15mm of Aluminium.  The answer is to take more time and use a two-part flask.  The pattern is first placed in the lower part (the drag) and packed with sand.  It is then turned over and the upper part (the cope) placed on top.  Pipes are fitted to produce risers for the molten metal to flow in and out.  The cope is then packed with moulding sand and the cope is lifted off the drag.  The pattern and pipes are removed, everything is cleaned up and the cope is re-fitted.  Molten Aluminium is then poured into the flask until it appears at the vent.  The greater height of metal gives a higher pressure - about 100mm of Aluminium.  The result is much crisper definition.

The same process was used to make the nameplates.  The artwork was based on the font used in the original Queen Anne advertising panels, and truncated corners were also used for this reason.

All Ruston locomotives have a worksplate with the works number of the locomotive.  Unfortunately, this had been stolen by souvenir hunters while the locomotive was dumped behind Aviemore Speyside station - or it may have been removed for safekeeping, but if so where is it?  The lower front cab panel shows the marks where this and other instruction plates were originally.
Fortunately, a picture of a worksplate from a Ruston 48DS of similar vintage appeared on an auction site, so the artwork could be reproduced. 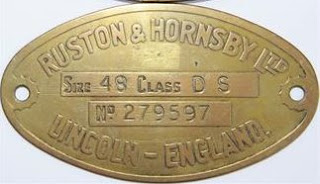 The technique for producing the worksplate is quite different and involves etching the design onto a piece of sheet brass.  The artwork is produced in negative format - that is black background and white letters.  This is then printed onto a transparent sheet using a laser printer.  The brass blank is covered with UV-photosensitive resist.  Spray-on resist is no longer readily available but self-adhesive film from China is very cheap (even including postage).  It takes a lot of practice to apply the film without air bubbles, but it can be done.

The negative is placed over the resist-covered brass plate and exposed to strong sunlight for 5 minutes (not much of that this year).  Afterwards the unexposed resist is washed off with some of the developer powder dissolved in water (the instructions are all in Chinese).  To etch the brass away, Ferric Chloride is used.  Fortunately an etching kit designed for making your own printed circuit boards and dating from the days of "Practical Electronics" magazine was to hand.  The etchant had not gone off, and after an hour or so (to get a really deep etch), the plate was removed and cleaned.  A proprietary brass blacking solution was used for the background.
The Size, Class and works number will be stamped onto the plate at a later date.

As can be seen from the picture of the cab panel, there were also 3 rectangular plates inside the cab that gave instructions on the driving the locomotive.  The text for one of these has been recorded from an online photograph, and the text for the other two will be investigated.  If anyone knows who has the originals, please let us know.
Posted by Restoration Man at 20:29 1 comment: