The brown topcoat has now been applied over most of the loco and the buffer beams finished in red.  The colours are the same as those used on the Hornby model (see here).  For the record, the brown colour is NCS S-7020-Y30R and the red is RAL-3000 "Flame Red".  The roof has been painted gloss black.  As the following photographs show, she is looking very smart. 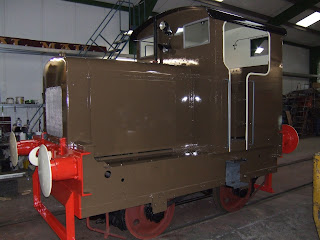 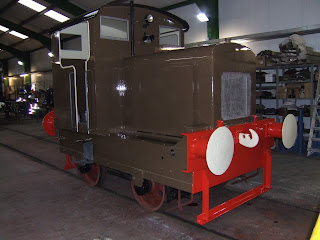 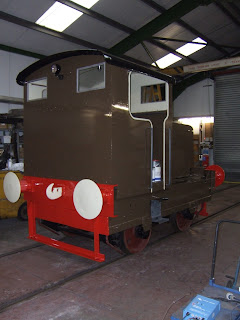 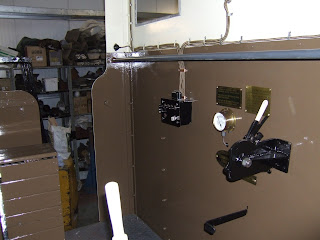 There are a few more details to complete and some more work inside the cab, but since the space in the Carriage Restoration Shed is now needed, Queen Anne has been moved out.  It is hoped the paintwork will be completed later in the year.  The artwork for the advertising vinyls is ready and these will be ordered once painting and lining is complete.

Some investigation was done to see if 3D Printing could be used to produce the rubber seals for the windows.  Unfortunately the 3D Printer available was an early (and now obsolete) model which failed, and most printer software does not readily support printing in flexible TPU (Thermoplastic Polyurethane).

So it has been decided to use commercially available rectangular U-channel rubbers and glue them to the aluminium frames.  This has been tested using a piece of 6mm plywood to determine the correct glass size.  The windows will eventually be glazed with 6mm toughened glass.

The frames will be pre-painted with brown on the outside face and cream on the inside.  This will allow them to be glazed "on the bench" and bolted onto the locomotive once other painting is complete.

There is a short video clip on the P-Way blog (see "Associated Blogs") of Queen Anne on the move in the yard in her new brown livery taken on 17/10/2020.  Also, a video was uploaded to Youtube in 2010 of Queen Anne being craned out of the isolated section of track next to the old Speyside station :-